Covid restrictions eased last week in England to a point where they are barely noticeable in people’s day-to-day lives. However, the subject of lockdowns has barely left people’s lips.

Days before the end of Plan B restrictions, the Serco Institute worked with independent polling experts at Survation to carry out a nationally representative survey covering, among other issues, respondents’ own behaviour during lockdown as well as their opinion of the planned vaccine mandates for health and social care workers in England, under which the sector’s unvaccinated frontline staff would lose their jobs. Our research uncovered that 58% of the British public support vaccine mandates for frontline health and social care workers, ahead of the Health Secretary Sajid Javid’s announcement of the policy’s shelving on the evening of Monday, 31 January[1]. Polling was conducted on 24 and 25 January 2022.

The Serco Institute does not take a position on any of the issues raised or views expressed in our survey.

Let’s start with how people viewed their own behaviours during the lockdowns. Over three-quarters of respondents (76%) stated they had not broken lockdown rules, while just 17% admitted to having done so. On first glance, this suggests a nation of law-abiding citizens, following the rules laid out for them. However, the truthfulness of this account is somewhat called into question by the response to our question, ‘Do you know anyone who at any point broke lockdown rules?’, to which 57% said they knew someone who had breached lockdown restrictions, while 37% said they did not. Clearly, there existed a significant disconnect between how people perceive their own actions and how they perceive those of the people around them. There are several possible explanations for this, including respondents’ reluctance to admit wrongdoing on their own part; respondents being unaware of which regulations applied at the time of their transgression and thus not knowing that they had in fact broken lockdown rules; or, of course, knowingly flaunting lockdown restrictions. Without more extensive polling as to people’s motivations, however, we cannot comment definitively on what these might be.

A demographic breakdown of the data unveils some divergence between various groups: over-65s, for instance, were the only age group where those who did not know anyone who had broken lockdown rules (49%) outnumbered those who did (47%). Younger people appeared more indifferent to breaking lockdown rules, with nearly one in four (24%) of the 18-34 age cohort admitting to having breached lockdown, compared to just 9% of those aged 65+. This is perhaps to be expected, given younger people’s much lower risk of becoming seriously ill and subsequently dying from Covid. 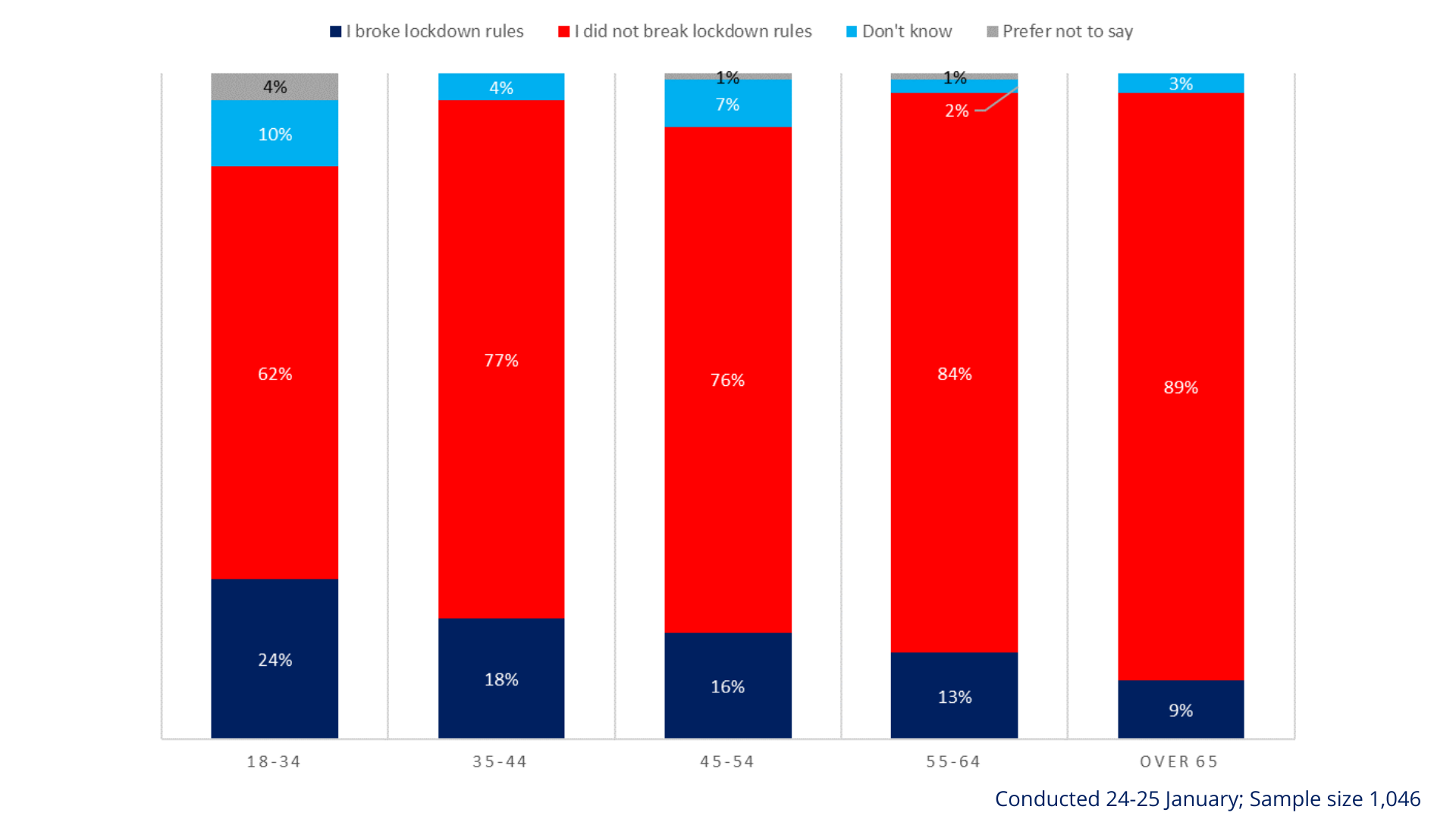 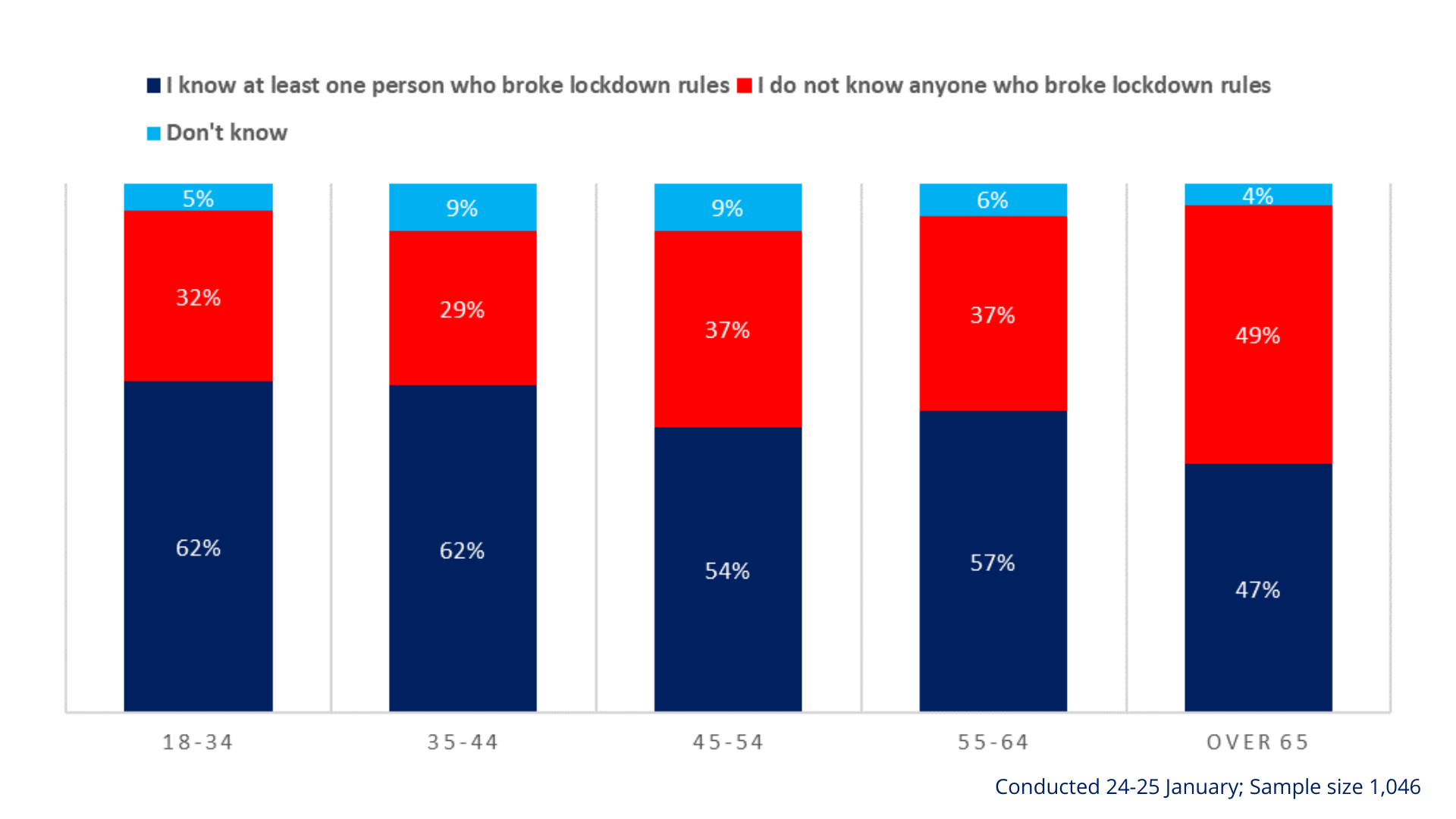 Voters from across the political spectrum were not so different from one another in terms of self-reported adherence to lockdown rules. Supporters of the Conservative, Labour and Liberal Democratic parties were roughly equally likely (17%, 17% and 16% respectively) to have breached lockdown themselves, but less likely than voters for ‘Other’ parties (24%). Labour voters were most likely to know someone who had broken lockdown rules (64%), followed closely by the Conservatives (60%) and ‘Other’ party voters (56%). This suggests that a common recognition of lockdown’s necessity may have cut through political differences, with majorities of voters of all political persuasions broadly following public health regulations.  According to the poll, the most Covid-compliant political group was Green voters, only 31% of whom knew someone who had broken lockdown rules and 0% of whom reported having violated lockdown themselves. 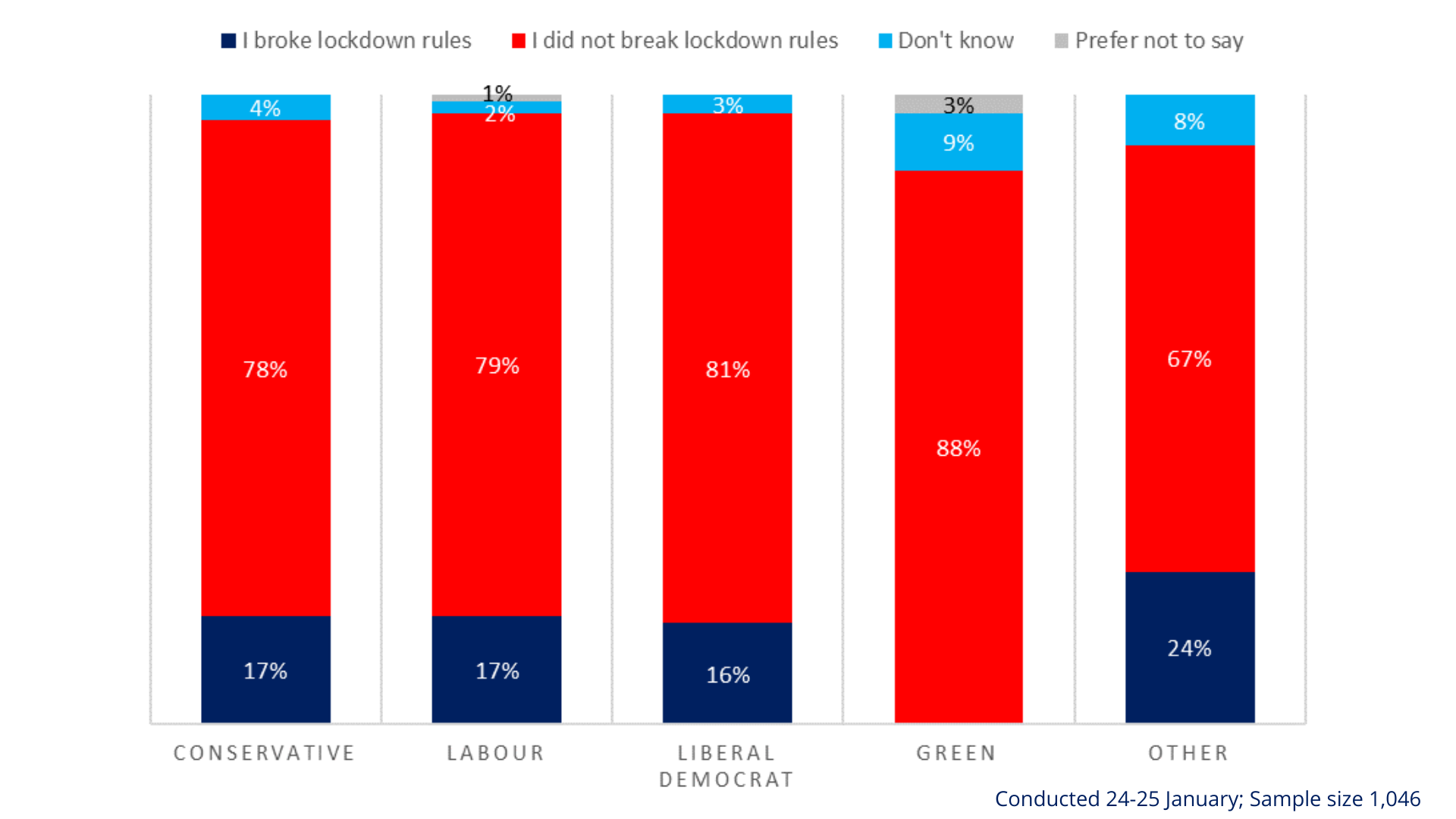 On another front in the discourse surrounding Covid policy, the Health Secretary Sajid Javid confirmed the Government’s decision to reverse plans for mandatory vaccinations for NHS staff in England, calling the planned policy ‘no longer proportionate’ given England’s high rates of vaccination and the Omicron variant’s lower virulence relative to its predecessor, Delta[2]. The change of heart follows opposition to mandatory vaccinations from a range of unions including Unison, Unite, and the Royal College of Nursing, as well as some well-publicised protests across the UK from London to Aberdeen. Questions of personal liberty and staff shortages were the main subjects of debate.

However, the Government’s vaccine mandate would have had the support of the UK public, according to a recent poll, undertaken by Survation and the Serco Institute just a week before the policy was shelved. Some 58% of respondents felt that vaccination should be mandatory for everyone working in frontline health and social care (unless exempt), with 33% opposed and just 9% saying they ‘don’t know’. This suggests that measures to increase vaccine uptake remain popular among Britons, and follows on from earlier polling showing high support for vaccine passports in many public settings in Britain, released by the Serco Institute on the day Plan B restrictions were announced. Reading between the lines, the Government’s motivation for the change in policy appears less about concerns over personal liberty and more about concerns over staff shortages; this at a time when hospitals are facing significant backlogs of elective surgery, and care homes under pressure due existing staff shortages. NHS England figures show that over 127,000 NHS and home care staff were unvaccinated as of 23 January, and staff groups have been warning for weeks that the policy would mean placing more acute strain on certain services, such as maternity services, while further stretching hospitals in London and Birmingham which have large numbers of unvaccinated staff[3].

Should Covid-19 vaccination be compulsory for frontline health and social care workers? 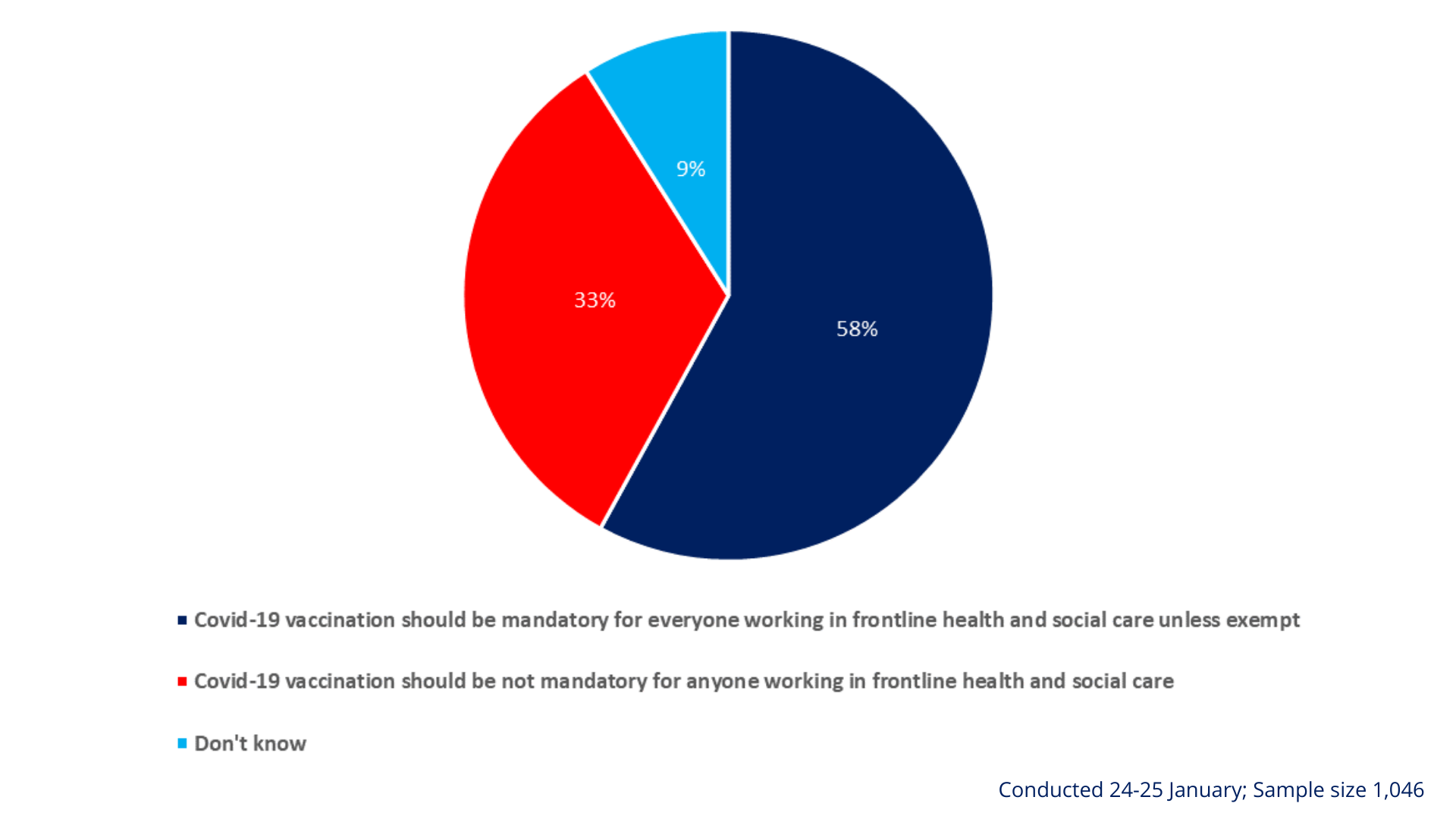 So, although Covid restrictions may have eased in England, the debate doesn’t look set to go away anytime soon. Furthermore, with early evidence that a still more contagious subvariant of Omicron, BA.2, may be fuelling the beginnings of a rise in cases after weeks of decline in January[4], we have not quite reached the point where Covid becomes endemic. What remains to be seen is whether the British people continue to take precautions, or whether nearly two years of lockdowns and restrictions have resulted in a fatigued indifference, especially in light of strong vaccination efficacy to date. In that case, the question becomes whether the Government will be able to reimpose restrictions, should they ever be needed again, and expect them to be followed by the UK public.

[1] ‘Ministers plan to scrap vaccine mandate for NHS staff in England’ – The Guardian.

Polling was conducted by Survation via online polls on 24 and 25 January 2022. 1,046 people aged 18+ living in the UK were covered. Data were weighted to the profile of all people in the United Kingdom, according to Office for National Statistics data. Differential response rates from different demographic groups were taken into account.

COP27: One year on from Glasgow, where does the British public stand on net zero?