New polling for the Serco Institute has found that public support for vaccine passports in the UK has risen since they were first explored in February this year.

Following our poll at the start of 2021, which found significant support for vaccine passports across a wide range of settings in the UK, the Serco Institute has – working with the same independent polling experts at Survation – undertaken an identical survey which has measured changes in public support for their introduction.

The research found that support for vaccine passports has risen by a (mean) average of four percentage points across the seven public settings we asked about.

This new data comes immediately in the wake of a UK Government announcement that NHS Covid Passes (known commonly as vaccine passports) will be required for entry to a number of venues across England.

The emergence of the Omicron variant has clearly impacted people’s behaviour already, but this poll confirms that there is a growing willingness for measures to be reintroduced that may supress the circulation of the virus.

Vaccine passports were first discussed in public policy circles in early 2021 as a possible measure to mitigate transmission of the virus and were introduced in a number of European countries, starting with France’s pass sanitaire, over the summer. In England, plans to introduce Covid passes for entry into clubs and other crowded events were scrapped in September.

Today, however, Prime Minister Boris Johnson confirmed that ‘Covid certification’ would be introduced across a number of different settings in England. The guidance released so far indicates that:

The Institute does not take a position on whether vaccine passports should be introduced. The research was conducted with the view to understanding compliance and support for vaccine passports and how this might impact frontline workers and public services who will have to implement any ‘Covid certification’ system.

The new research shows that public support for vaccine passports has risen since February by at least three percentage points across six of the seven settings we asked about, while opposition to their use has fallen by at least two points. Only for the setting Entering places of work did respondents return unchanged levels of support for and opposition to vaccine passports (58% Support / 19% Oppose). 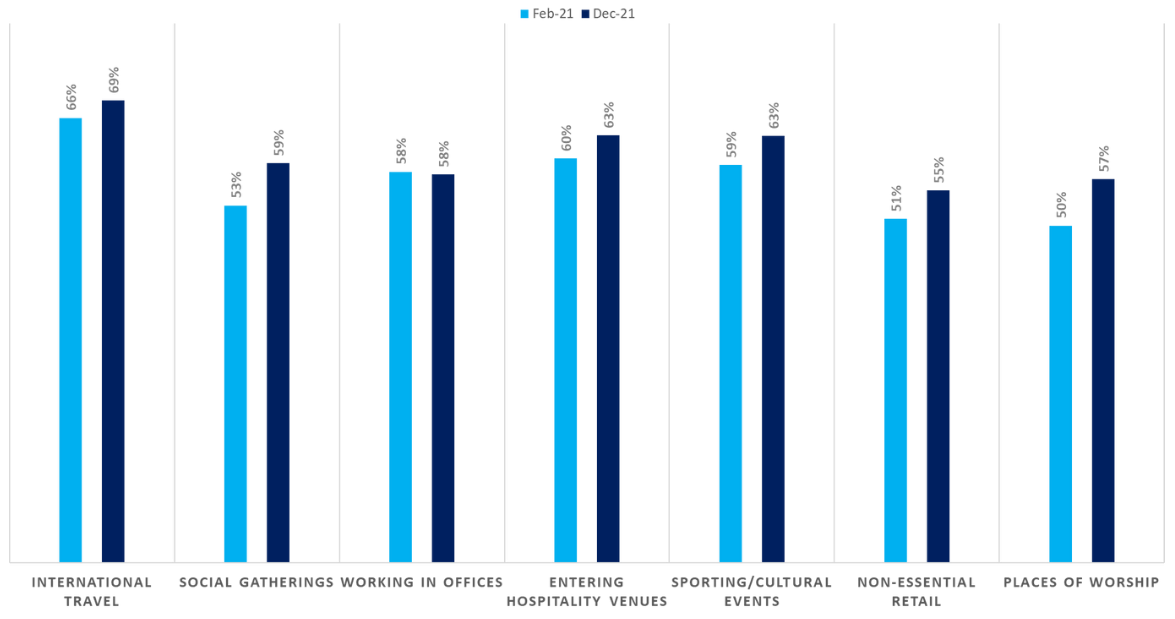 Opposition fell most sharply, by four points, for Social gatherings (to 19%) and for Non-essential retail (to 20%, the highest level of opposition registered).

Change in levels of opposition - Feb-Dec 2021 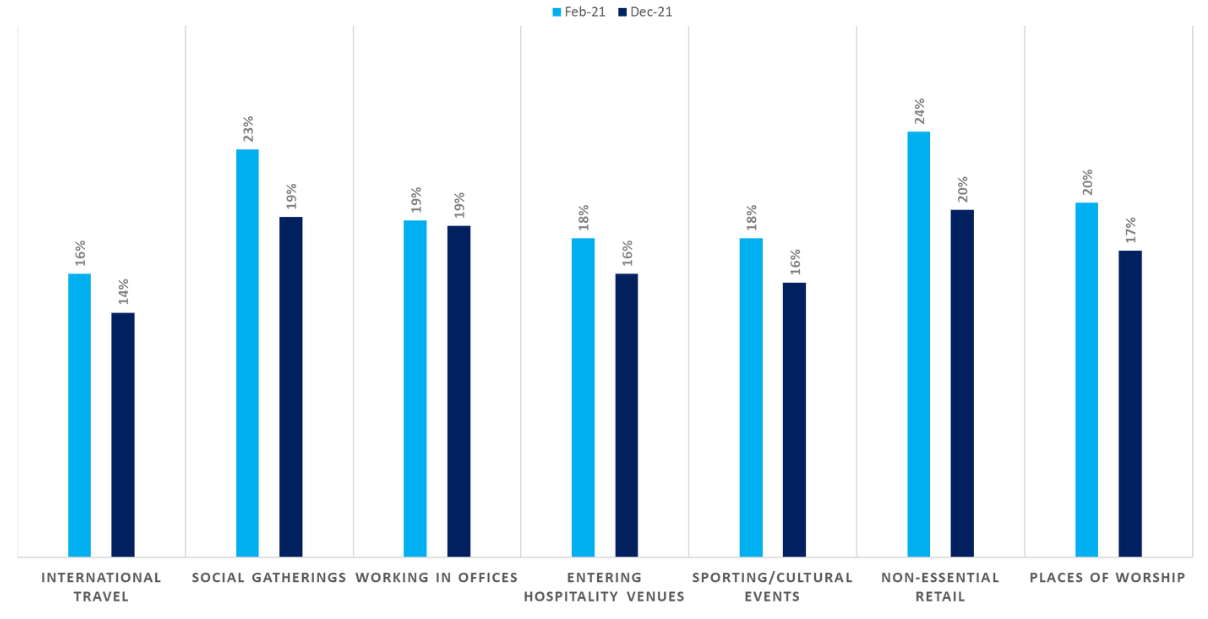 Older age groups were consistently more likely than younger survey takers to support vaccine passports, with support among 55-64-year-olds and over-65s never dipping below 60% across all settings. For International travel, overwhelming majorities of older respondents (81% of 55-64-year-olds, 82% of over-65s) were in favour of vaccine passports. By contrast, across six of the seven settings, 35-44-year-olds were least likely to support vaccine certificates. This led in some instances to startling disparities, with, for instance, two-thirds (67%) of 55-64-year-olds supporting vaccine passports for Places of worship but only 44% of 35-44-year-olds and 47% of 18-34-year-olds feeling the same. This is perhaps a reflection of older people’s far greater susceptibility to becoming severely ill and dying from Covid-19, as well as their far higher chances of being fully vaccinated, including having received booster doses.

There also existed some variation between the UK nations, although data regarding Wales should be regarded with caution given the small sample size of respondents and Northern Ireland’s respondents were below the minimum base of 30 and therefore cannot offer credible data. English respondents were generally less supportive of vaccine passports than their counterparts in Scotland and Wales, although this varied based on setting. Scottish and Welsh support for vaccine passports was higher than the UK average across five and six of the seven settings respectively, with Sports & cultural events the only setting where both Scotland and Wales recorded below-average support. Notably, with regard to Entering hospitality venues, support for vaccine passports here was lower in England (62%), where Covid certification has not been introduced, than in Scotland (65%) and Wales (77%), where Covid certificates are already in effect in a range of hospitality settings. The continuing public support for the vaccine certification schemes in place in those nations for months may be a comfort to UK ministers now considering introducing these measures to England. However, all UK nations showed majority support for vaccine passports across all seven settings.

Broadly, therefore, vaccine passports continue to enjoy a broad degree of support from the British public, across differing demographics, geographies and political affiliations. As the UK Government looks to tighten restrictions to slow the spread of the Omicron variant, ministers may find some reassurance that at least one of the pillars of their Plan B Covid containment strategy has provisional public support.

[1] 'Age, not class, is now what divides British voters most' – The Guardian.

Polling was conducted by Survation via online polls. Data were weighted to the profile of all people in the United Kingdom, according to Office for National Statistics data. Differential response rates from different demographic groups were taken into account.

The Policy Year Ahead: Time for reflections, actions and elections?

Article: COP26: Governments can go the distance, but how far will people go?

View all Tweets
@SercoInstitute
✍️ New blog Why, despite their continuing importance to citizens’ lives, have public services declined as an election issue in Western democracies? Why have election campaigns in recent years instead focused on headline figures & culture war issues? 🧐 https://t.co/bF1hRoJ4nc
@SercoInstitute
Check out our newest blog below 👀 We identify three policy trends that we expect in 2022, which we've also outlined in this🧵 https://t.co/AsJLmRuUK2
@SercoInstitute
✍️New blog 𝗪𝗵𝗮𝘁 𝗺𝗶𝗴𝗵𝘁 𝟮𝟬𝟮𝟮 𝗵𝗼𝗹𝗱 𝗶𝗻 𝘀𝘁𝗼𝗿𝗲?🤔 Even if we are truly within reach of a ‘post-pandemic’ world, the ripple effect of Covid-19 on all aspects of society will still be felt... https://t.co/JXnVPVqEOY