Just 11% of British voters claim Westminster politics will be the biggest factor in deciding who they will vote for in today’s local elections on May 5, according to a new, nationally representative survey by the Serco Institute.

The new research additionally found that local issues were deemed by respondents to play the most decisive role in determining their vote, with 21% identifying local issues as playing the biggest role in determining how they cast their ballot. Public services came second, with 14% ranking government services as having the biggest role in helping them decide who to vote for, and Westminster politics, at 11%, came last of the three suggested reasons.

The leading public services think tank the Serco Institute, working together with independent polling experts at Survation, sought to examine the British public’s views and the policy priorities driving their voting behaviour ahead of the UK’s local elections.

Excluding the 39% of respondents who either lived in areas not holding elections or who were unable to vote, this means that about one in three (34%) people expecting to vote in this year’s elections identified local issues as the chief deciding factor guiding their choices. Of course ‘local issues’ and ‘public services’ are often interconnected.

There was some evidence in the polling data of attitudes towards local elections differing among age groups. Older voters, for instance, were more likely to regard local issues as playing the biggest role in deciding who they would vote for, with 27% of 55-64-year-olds and 25% of over-65s taking this view, as compared to just 16% of 18-34-year-olds. However, younger respondents were twice as likely as older ones to state they did not plan to vote (7% of 18-34-year-olds and 3% of over-65s indicated as much). This is consistent with evidence from past elections, which indicates that older voters make up a larger share of the electorate at local elections: 42% of voters under 45 at the 2019 general election had not voted in the 2018 local elections, compared to 29% of 45-66-year-olds and 19% of over-67s[1]. 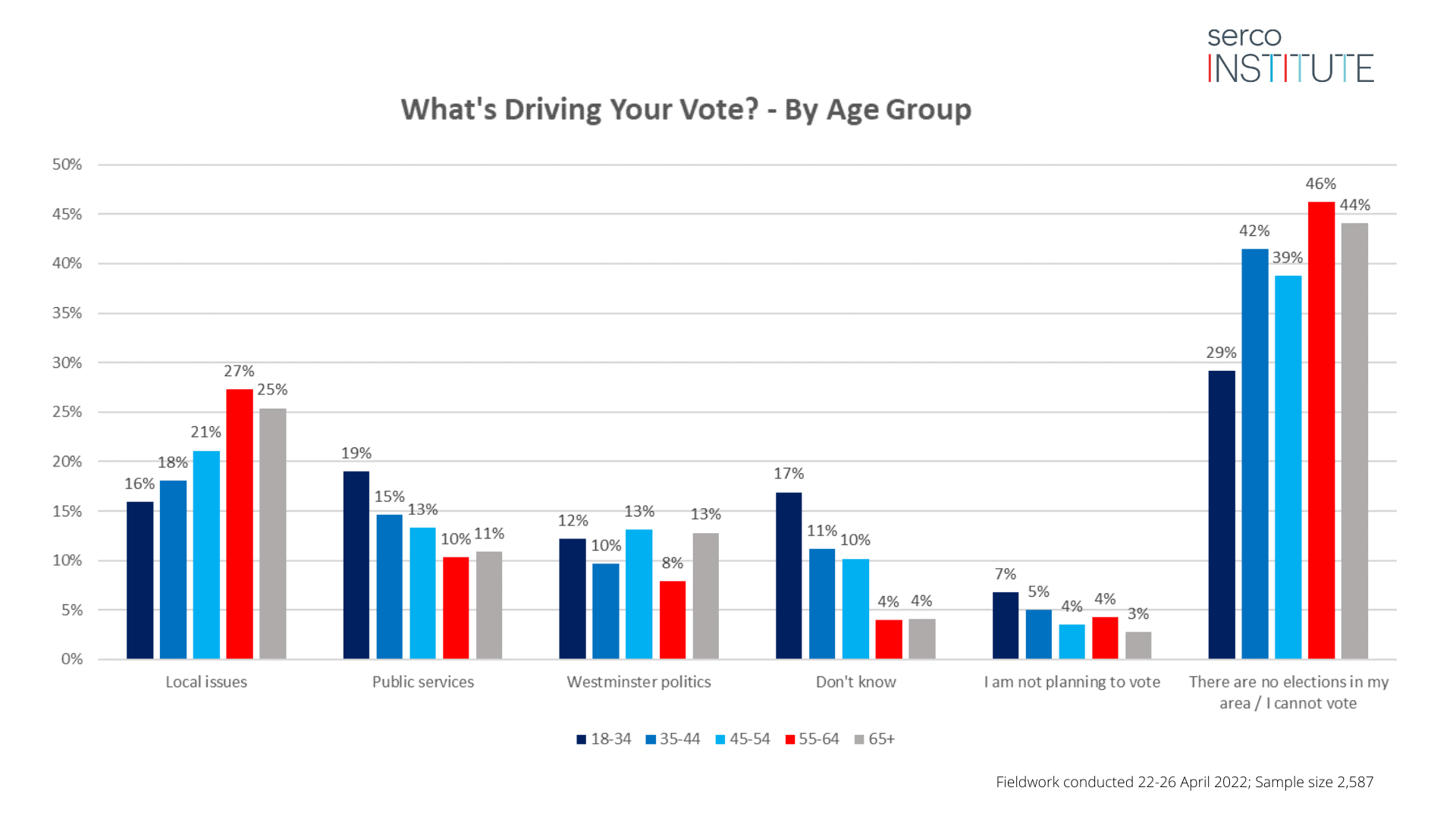 Furthermore, the sentiments expressed by respondents in this poll enjoyed cross-party support. Similarly low proportions of Conservative (14%), Labour (14%), Liberal Democrat (14%) and SNP (20%) voters identified Westminster politics as the primary consideration helping them decide who to vote for. There appeared, therefore, to be a broad consensus among respondents of all political persuasions that the foremost concerns in their minds ahead of the May elections were local ones. 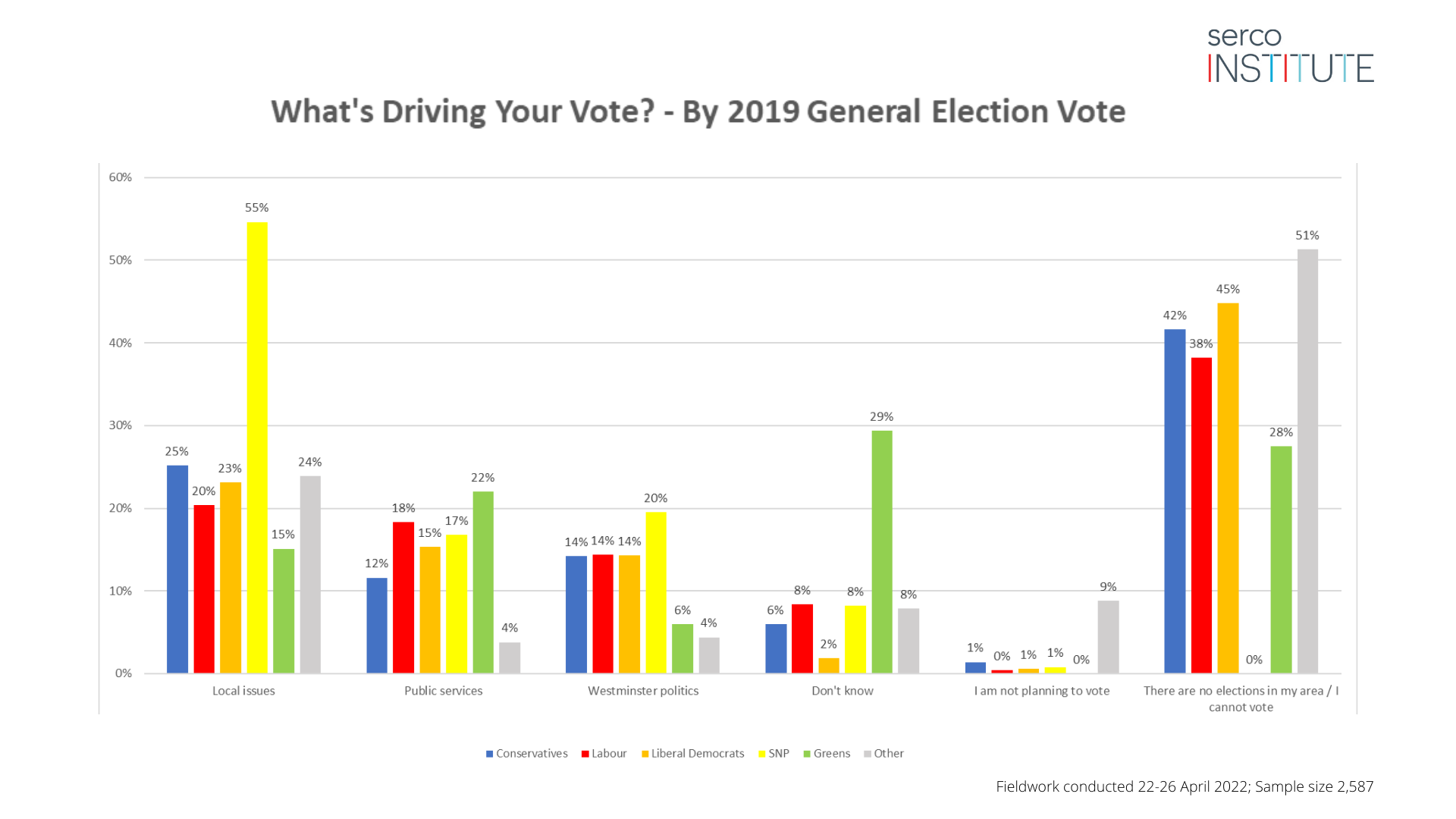 “Local elections in the UK are often seen as reflections of public opinion at the national level, but these results show that it’s not quite that simple.

“From this poll, it’s clear that most voters in local elections at least claim not to be driven by happenings in Parliament, but by the issues impacting their lives day-in, day-out. Of course, in reality most people will consider a mix of local and national issues when they decide who to vote for.

“Nonetheless, this research shows that the results from this set of elections cannot solely be interpreted as a reflection of public opinion of national politics.

“More than anything it shows the importance of high-quality local services and effective local government, as it is clear that these issues continue to play an important role in people’s lives.”

[1] ‘Pundit peril: local elections are not a straightforward measure of the public mood’ – UK in a Changing Europe.

You can find the data tables here.

The survey was conducted between 22-26 April 2022, with 2,587 UK residents aged 18 and over polled and the data weighted to be nationally representative.