The COP27 climate conference in Egypt concluded on Sunday with a landmark ‘loss and damage’ fund, wherein developed countries agreed to provide finance to help developing countries devastated by ever-worsening climate disasters. This first-of-its-kind deal was, however, seen to have come at the expense of stronger commitments to reducing greenhouse gas emissions causing climate change[1].

Since historic pledges to tackle methane emissions, deforestation and coal-fired power were made last year in Glasgow[2], the global context has drastically changed: Russia’s invasion of Ukraine in early 2022 has sparked the most severe global energy crisis in decades, as countries have scrambled to reduce their dependence on Russian fossil fuels even as power bills at home have risen. At the same time, the climate crisis continues to escalate, and despite the International Energy Agency having recently found that the war in Ukraine is likely to accelerate the clean energy transition and see carbon emissions peak in 2025[3], the world remains on track to warm by 2.5C, worsening the already devastating climate disasters seen this year in Pakistan, Puerto Rico and more[4].

Shortly after COP26 concluded last year, the Serco Institute, in conjunction with independent polling experts at Survation, ran a single-question poll asking the British public whether they would prefer to pay more in taxes or change their behaviour, or neither, to reduce their personal carbon emissions. We ran this survey again this year, putting the same question to UK respondents and, in view of the energy supply crisis and rising fuel bills, also asking respondents whether they felt net zero should be de-prioritised by the Government until energy supplies are secure and power bills stabilise.

Broadly, Britons signalled their desire for the Government to prioritise the cost of living crisis. While behavioural change remained by some margin the public’s preferred option for cutting emissions, the percentage of respondents willing to change their behaviour to reduce their emissions fell 13 points from last year, from 64% to 51%. 12% of UK residents indicated they were willing to pay more in taxes to combat emissions, a five-point increase from last year – the rise in support for green taxes is interesting, given high inflation and recent tax rises announced by the Chancellor in his Autumn Statement. Finally, the share of Britons who were unwilling to either pay more in taxes or change their behaviour to reduce their emissions rose five points to 27%, nearly three in 10 respondents. 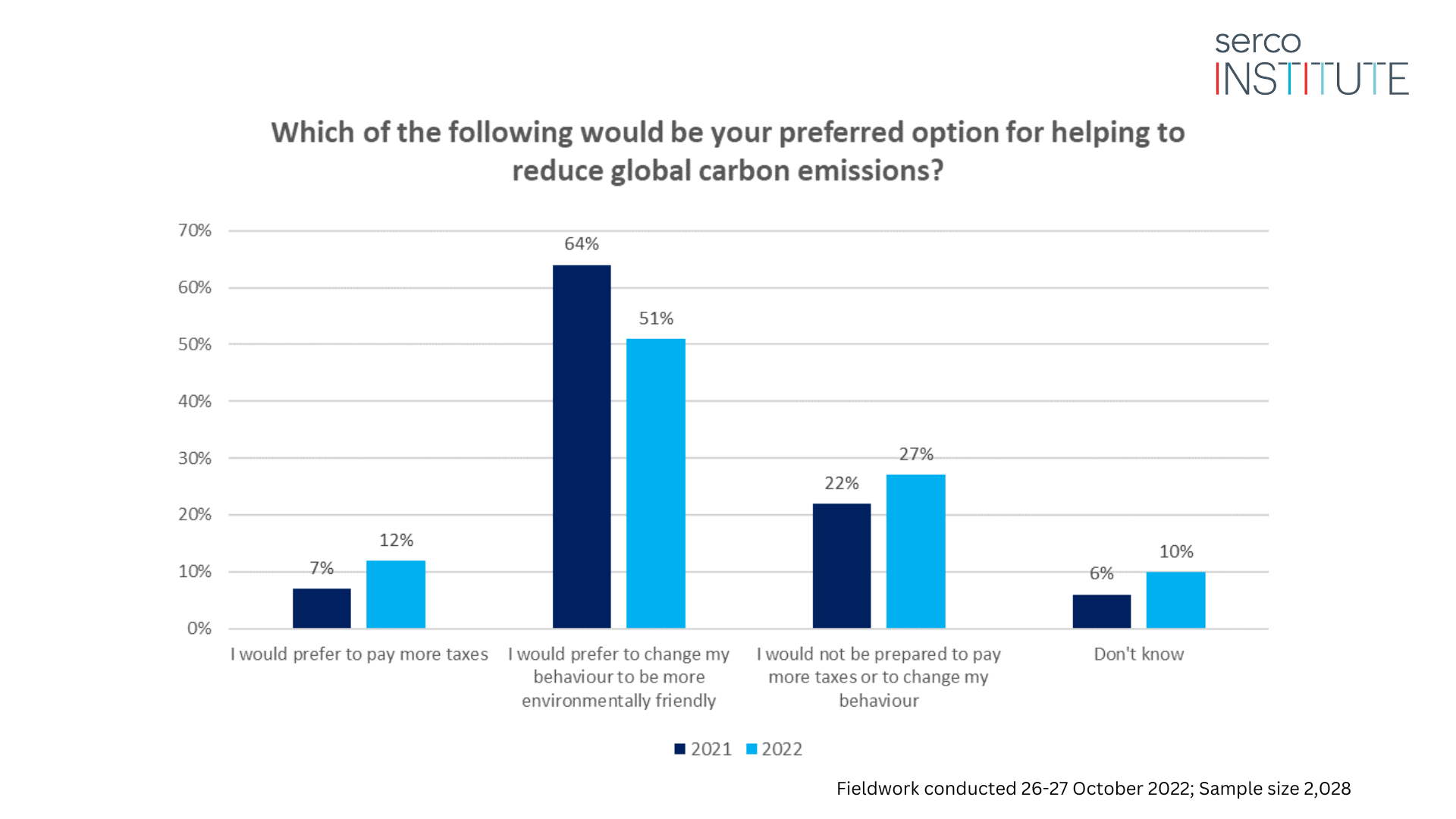 Furthermore, nearly half (46%) of respondents agreed that net zero should be de-prioritised until energy supplies and bills were under control, while 40% felt net zero should remain a priority for the Government. Excluding the 14% of respondents who answered ‘Don’t know’, this means a majority (53%) of respondents who expressed an opinion felt energy supplies and bills should be prioritised over the net zero transition, compared to 47% who felt net zero should remain a priority. All in all, these results suggest that, unsurprisingly, bread-and-butter issues have taken precedence among British citizens over climate action amid the cost of living crisis and rising energy bills. 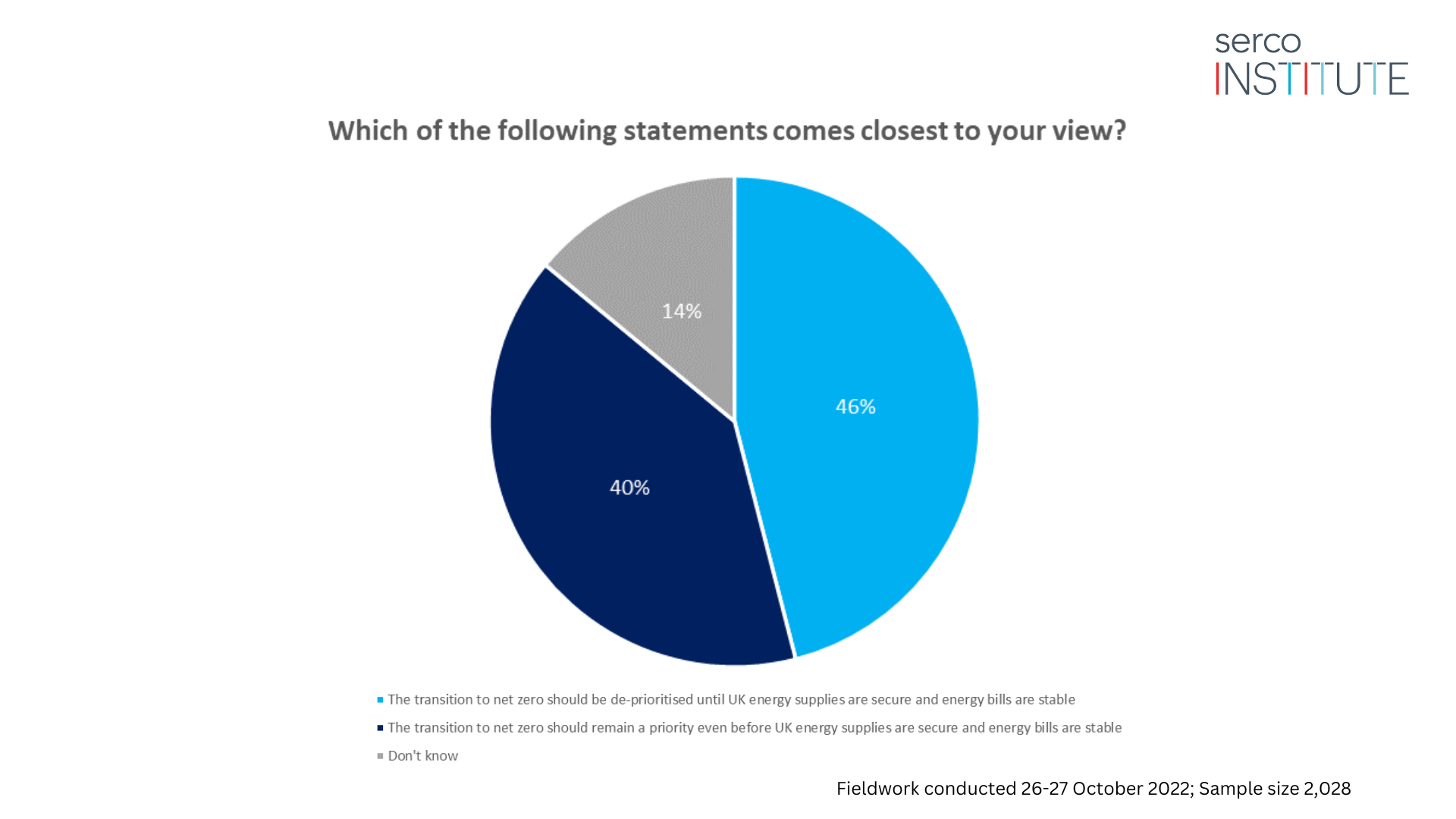 A closer examination of the polling data unveils interesting insights into how different social groups’ views on climate action. Men, for instance, were eight points more likely than women to agree that net zero should be de-prioritised (49% vs. 41%) – this is not unexpected, given other polling evidence which suggests that women are more climate-conscious than men[5]. Older age groups were also more likely to take the view that net zero should be de-prioritised, with majorities of the 55-64 and over-65 age groups (both 52%) feeling climate action could take a backseat, compared to just 38% of respondents aged 18-34 who felt this way. This may be attributable to older people’s incomes being harder hit by rising power costs[6], alongside evidence that older people are less likely to be concerned about the climate than their younger counterparts[7].

The polling research also revealed some interesting divergences in opinion along political lines. The headline figures were mirrored in all groups of voters – support for behavioural change declined relative to last year among 2019 Conservative voters (66% to 51%), Labour voters (68% to 56%) and Liberal Democrat voters (75% to 56%). Moreover, while Conservative voters remained, at 29%, most likely to support no change in behaviour or in taxation, support for no action rose more sharply among Labour (15% to 23%) and Liberal Democrat voters (12% to 22%). 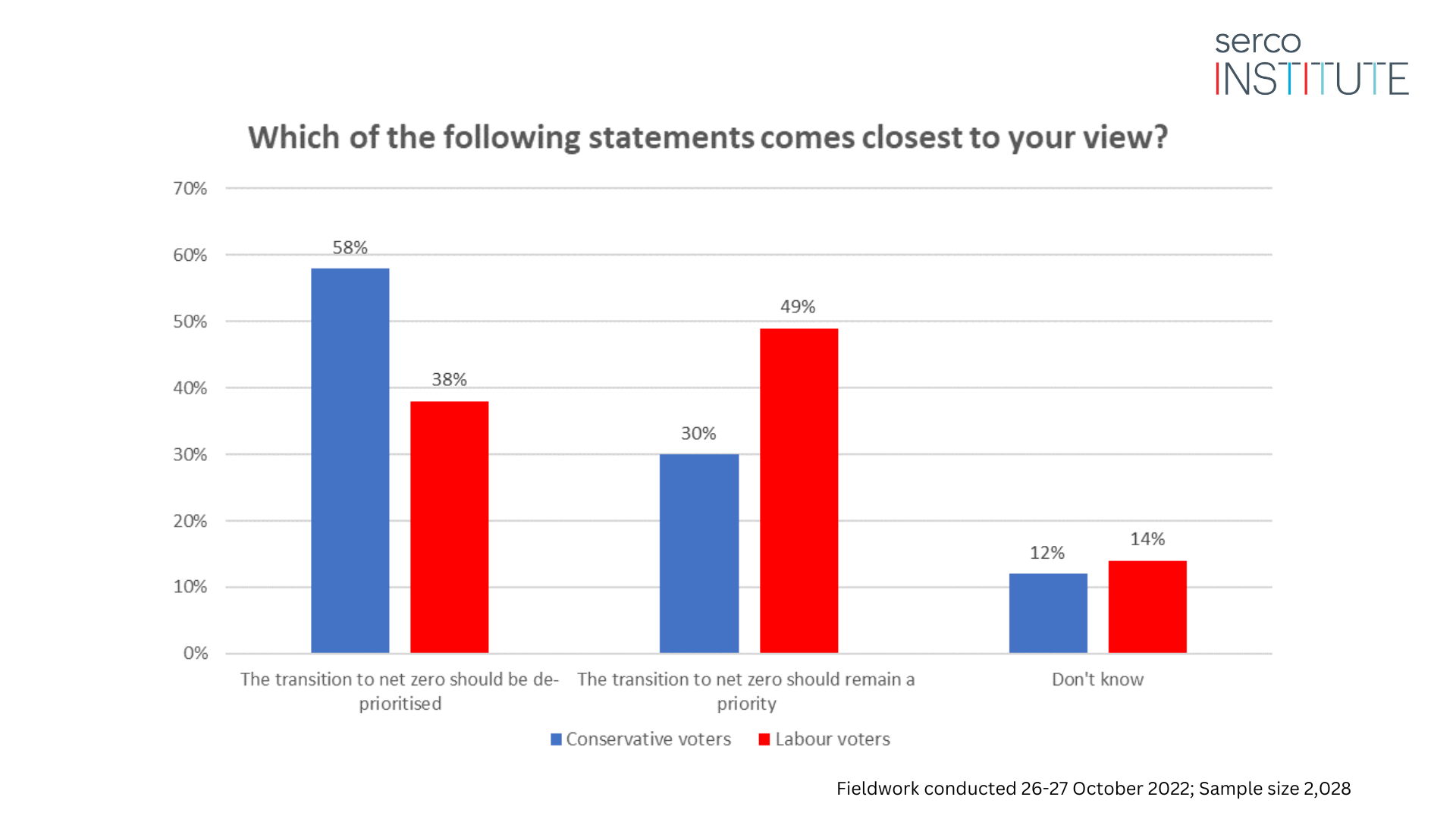 The key takeaway from these polling results seems to be that the cost of living crisis and bleak economic outlook have somewhat dampened public support for the net zero transition in the past year: nearly one in two UK voters think net zero should be de-prioritised for the time being, and the share of the public unwilling to change their behaviour or pay more in taxes to tackle their emissions has risen to nearly three in 10. Even so, it is notable that a majority (51%) of Britons remain happy to change their behaviour to reduce their carbon footprint, and that the population is split nearly in half (53% vs. 47% of those who expressed an opinion) on whether net zero should remain a priority.

With last week’s Autumn Statement having made clear the Government remains committed to slashing emissions by 68% by 2030[8], UK policymakers must now balance Britain’s net zero obligations with the needs of the British populace. With behavioural change remaining the public’s favoured way of cutting emissions, the way forward for the Government may be to encourage Britons to adopt low-carbon behaviours – ministers have seemingly understood this, as the Chancellor last week announced £6bn in funding to improve energy efficiency and upgrade boilers in British homes[9]. However, it is clear that climate action has receded this year in the minds of UK voters – even with incentives, it remains to be seen whether Britons will change their behaviour quickly enough to fulfil the Government’s net zero pledges.

[6] ‘Older generations will face the greatest income squeeze from the surging energy costs this winter – but young people will struggle most to afford their bills’ – Resolution Foundation.

Polling was conducted by Survation via online polls. Data were weighted to the profile of all people in the United Kingdom, according to Office for National Statistics data. Polling was undertaken between 26-27 October 2022 and covered 2,028 people aged 18 and above living in the UK. Differential response rates from different demographic groups were taken into account.