Since 2016, the Kingdom of Saudi Arabia (KSA) has been undergoing a transformation, ushered in by the modernising reforms of its Vision 2030 programme which have had a huge impact on Saudi society. One of Vision 2030’s key planks is its Nitaqat, or Saudisation, scheme, designed to encourage Saudi nationals to take up employment in the private sector. Two in three working Saudis are employed by the public sector, with their pay making up nearly half (45%) of government spending[1]: Vision 2030 is seeking to reduce the percentage of Saudis employed by the state to 20% by 2030[2]. Under Nitaqat, private sector employers with 10 or more employees must hire a certain percentage of Saudi nationals depending on industry and company size; companies with nine employees or under must still hire at least one Saudi[3].

While sector- and role-specific guidelines are continuously amended to reflect shifting priorities, overall employment trends are moving in Riyadh’s preferred direction: nearly one in four (22.75%) of the Kingdom’s private sector employees were Saudi nationals in the first quarter of 2021, with new Saudi employees entering the private sector reaching 121,000 in the same period. Moreover, these overall figures mask often large disparities between sectors: in Saudi Arabia’s finance and insurance sectors, for instance, an estimated 83.6% of employees are Saudi[4].

These represent a break from convention, in which Saudis often go into government jobs for shorter hours and greater job security; yet with half a million young Saudis entering the labour market annually[5], and two-thirds of the KSA population aged under 35[6], it is clear the Government cannot sustainably continue to employ all Saudis.

New research by the Serco Institute would appear to confirm that the Saudi citizenry recognise the importance of Saudisation: a new poll shows that nearly eight in 10 Saudi respondents (79%) believe that it is important for international companies with operations in the Kingdom to reserve a specific proportion of jobs for Saudi nationals.

How important is it for international companies to allocate a specific proportion of jobs for Saudi nationals? 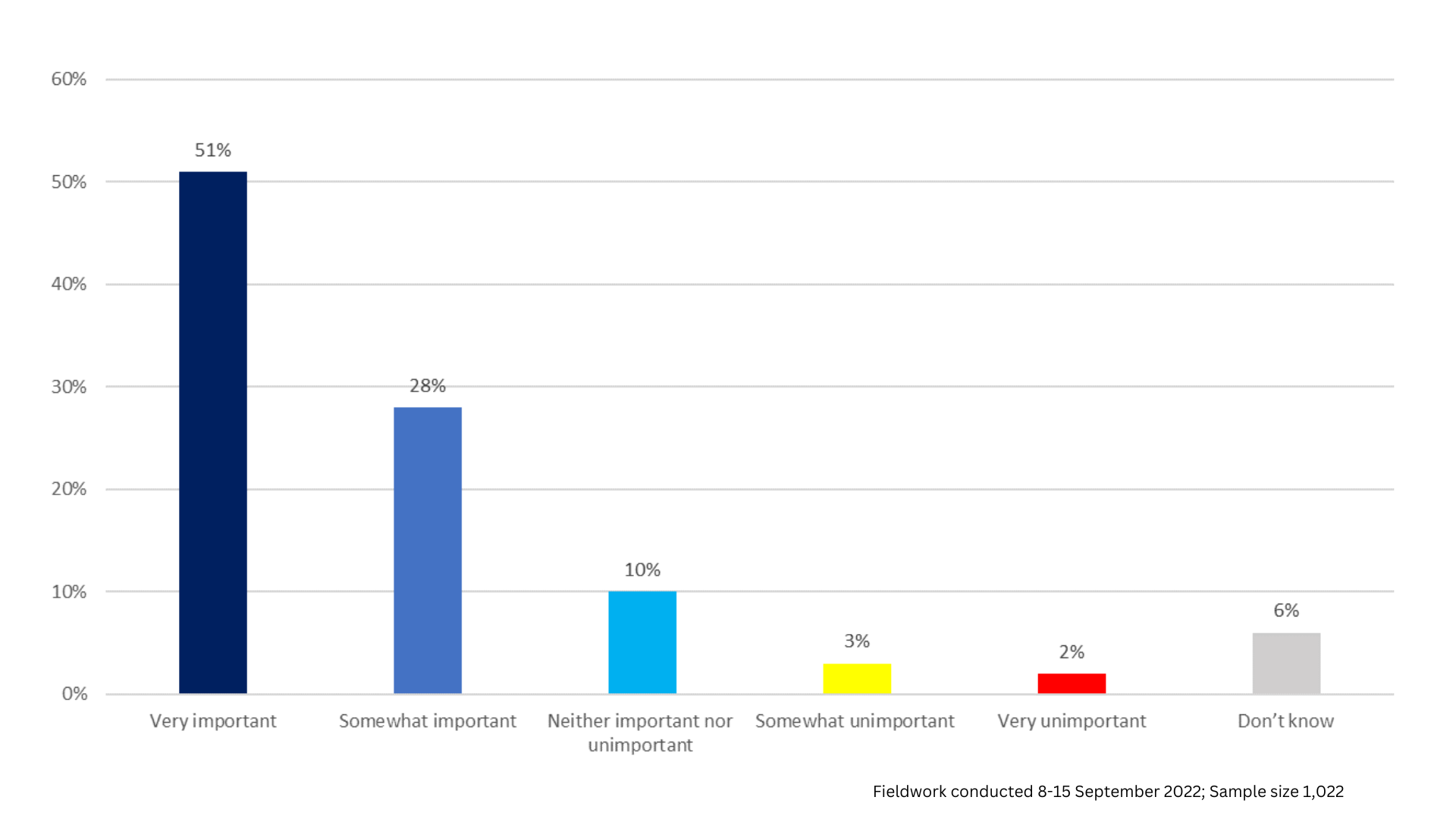 So strong is public support for the Government’s Saudisation programme that over half of Saudis (51%) in the Institute’s poll agreed it was ‘very important’ for a percentage of jobs to be allocated exclusively to Saudi nationals. A further 28% believed it was ‘somewhat important’ for multinationals operating in Saudi Arabia to reserve jobs for KSA nationals. One in 10 felt it was ‘neither important nor unimportant’, and just 5% felt it was not important for international companies in the Kingdom to set quotas for the employment of Saudi nationals.

This suggests the KSA Government’s Saudisation initiative is extremely popular among residents of the Kingdom, and, what is more, these sentiments enjoy broad support across different segments of the population. Similar proportions of men (81%) and women (76%), for example, said that it was important that a certain percentage of positions be open only to Saudi nationals.

While the Saudisation policy commanded convincing majority support across Saudi Arabia’s various age groups, however, young Saudis of working age were more likely to consider it important for some jobs to be reserved to KSA citizens. 86% of 25-34-year-old respondents felt Saudisation was important, 16 points above the number of 18-24-year-olds who shared their sentiments. This may initially be somewhat surprising, given the unemployment rate among Saudis in their early 20s is approaching 40%. However, a Harvard Kennedy School paper produced for Saudi Arabia’s Ministry of Labour has speculated that Saudisation employment protections, which are intended to improve Saudis’ perceptions of private sector job security, are also making employers more reluctant to hire young people with little previous work experience[7]: in the face of this reluctance, 18-24-year-olds may not see the Saudisation policy as benefiting them. The abovementioned report suggests policies to encourage low-cost ways of gathering information about young workers as a supplement to existing preferential policies for hiring Saudis[8].

How important is it for international companies to allocate a specific proportion of jobs for Saudi nationals? - By age groups 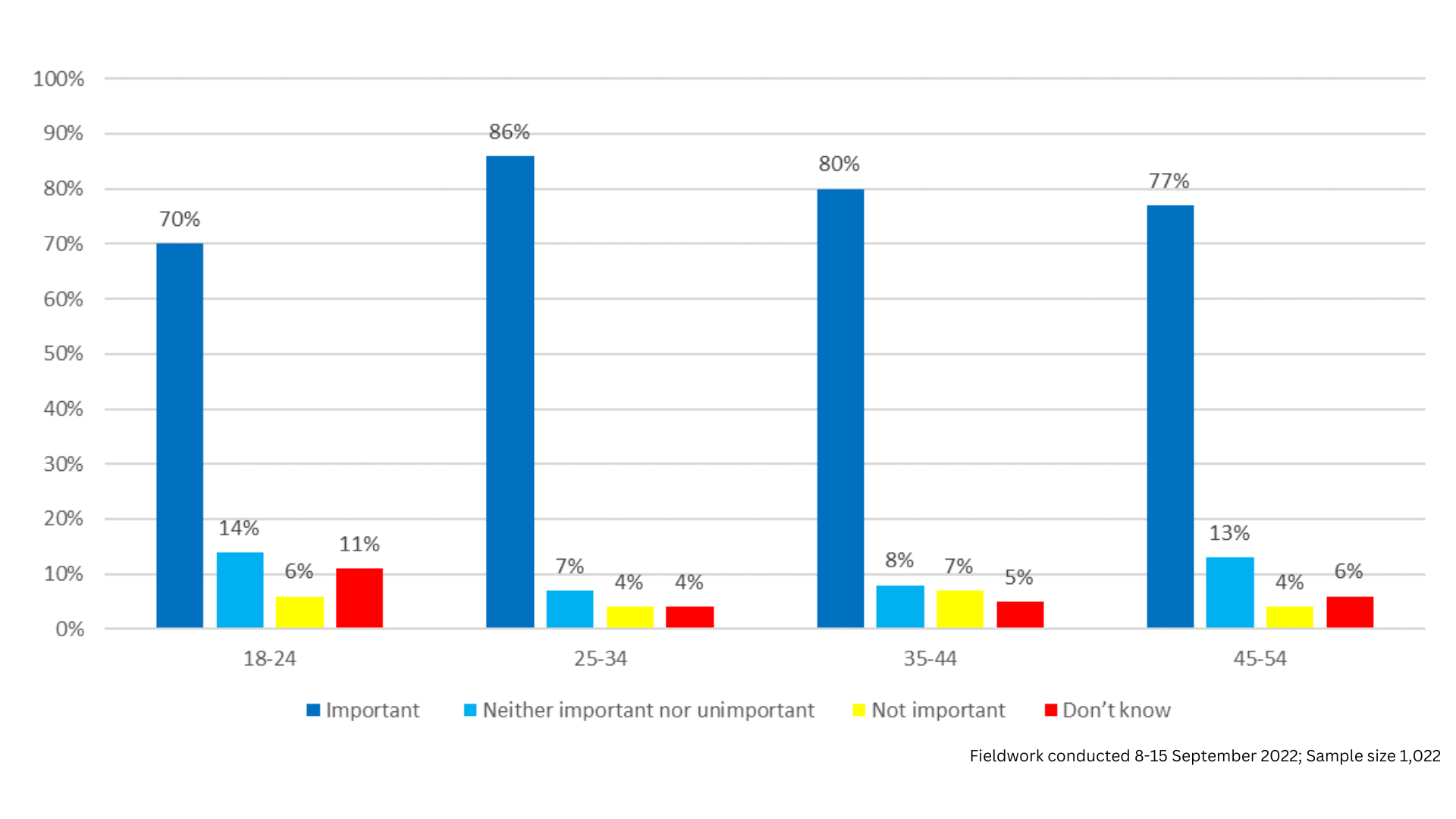 Policymakers in Saudi Arabia will be comforted to know that the Saudisation programme enjoys broad support from the Kingdom’s population, and better still to see evidence that it may be having the desired effect by encouraging young workers not to see the public sector as their only career path.

[6] ‘Two-thirds of Saudi Arabia’s population is under 35’ – Gulf Business.

COP27: One year on from Glasgow, where does the British public stand on net zero?